A few weeks ago, as I was shimmying by the pool on vacation with my sister, a teenage girl approached me, smiled, and – with only the best intentions – said, “you’re so skinny it hurts.”

So skinny it hurts.

Her comment knocked the wind out of me, made my heart skip a beat. It infuriated my loyal sister, who seriously considered fighting this chick on the spot. I couldn’t even muster up a response at the time so I merely smiled and walked away, but her comment has haunted me ever since.

The thing is, I have been so skinny that it truly, physically hurt. It used to be painful to sleep on my side because my bony knees would knock together so much. Opening a heavy door felt like a feat of strength and determination that left me exhausted. Everything from carrying my backpack to bumping a table left me bruised. My muscles (or lack thereof) constantly ached like I had the flu. My body was literally breaking down because it didn’t have the fuel it needed to keep going. That is so skinny it hurts.

But far worse than the physical pain of being too thin was the emotional pain that accompanied it. I vividly remember the range of reactions I would see in people’s eyes as they looked my skinny body up and down – shock, confusion, disbelief, disgust – and the shame I felt in return. I swore off tank tops, shorts, and (God forbid) swimsuits for fear of the reactions I would get if I exposed my emaciated limbs. I stopped wearing makeup and doing my hair even for special occasions because beauty felt entirely unattainable to me. It broke my heart to look into my friends’ eyes and know that they didn’t believe me, that they thought I was choosing to destroy my body rather than watching helplessly as it happened before my eyes. I have never in my life felt so isolated and so alone. That is so skinny it hurts.

The ironic part is that was nearly two years and 25 pounds ago for me. Today, I am confident enough to shimmy in my swimsuit, strong enough to dance for hours by the pool, happy enough to go on vacation without a care in the world. I might be thin now, but I am so far from so skinny it hurts.

What still hurts is acknowledging that people don’t know my story. Most people assume I try every day to maintain my thin figure, but little do they know how hard I have worked to gain weight and restore my health over the past few years. When people see me on the street, they have no idea that I would gladly be 20 pounds heavier if it meant that I could be as strong and capable as I was five years ago.

What hurts is knowing that women in our society equate beauty with a number on the scale. People assume that skinnier is always better without having even the slightest idea of what lies below the skin. Losing weight contributed to one of the darkest periods of my life but gaining weight did not reverse it. Beauty and happiness lie in confidence in and peace with yourself rather than a dress size. Health lies in nourishment and self-care, strength and self-love – not a certain weight. 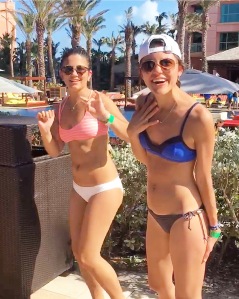 The innocent bystander may think I’m so skinny it hurts, but I know what that it is and I know it is behind me now.  The next time you envy someone else’s body, remember that you have no idea how they got to where they are now or how they are feeling under their skin. And when you are tempted to critique the physical appearance of your own body, I challenge you to instead be grateful for its many capabilities.

Friends, let’s embrace and love our bodies rather than resenting them. With this mindset, we will never be so skinny – or so far in the opposite direction – that it hurts.

16 thoughts on “So Skinny It Hurts”