I only had about 58 hours in New York City last weekend, so I had to make very strategic food choices. At almost every meal, I sought out a new treat or dining experience that I had been secretly planning for months. Here were my choices: 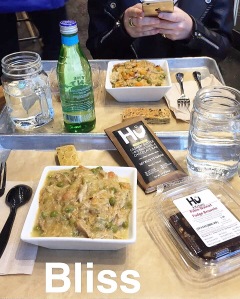 1. Hu Kitchen: I went to this 100% paleo (+quinoa, randomly) restaurant four times in my 2.5 days in New York…yes, FOUR. I know that seems excessive, but the food was DELICIOUS and there was such a huge selection from which to choose! I am a big advocate of a balanced approach to healthy eating that includes the occasional chocolate chip cookie or slice of pizza for those who can do eat those without serious repercussions, but I unfortunately am not one of those people. Having said that, it is extremely rare for me to walk into a restaurant where I can order almost anything on the menu without making substitutions, especially desserts! Choosing between the chicken pot pie and the flatbread pizza or the blondie and the brownie was honestly exciting for me!

But to avoid having to make too many tough decisions, I went back over and over again to try new goodies 🙂 Here were some of the highlights: 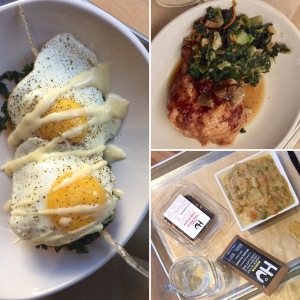 Eggs Benedict with dairy-free hollandaise     served on a PALEO BISCUIT (that seriously     tasted like a biscuit).

Dark chocolate bar with cashew butter filling (I had four throughout the course of the   weekend…whoops).

I truly cannot express how much I loved every single thing I tried here. For those who are looking for it, there are two locations – one right by Union Square and one 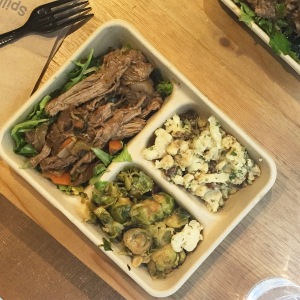 near the Met. Try both.

2. Dig Inn: after seeing this restaurant all over every Boston- or NYC-based food insta account I follow for the past few years, I knew I had to try it. This fast-casual place serves super clean meat mains + veggie sides. My meal was so delicious, so satisfying, and SO inexpensive for NYC ($10!). I had the shredded beef, Brussels sprouts with maple & Sriracha, and tahini cauliflower. I would definitely order the same thing again, although I might do double Brussels next time because I am obsessed. Dig Inn has tons of locations all over NYC and Boston.

3. Pressed Juicery: I fell in love with Pressed 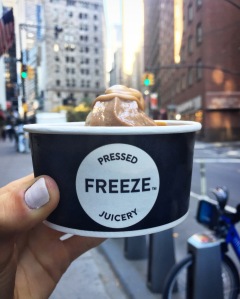 during my summer in Palo Alto, but I had no idea it had expanded into NY until I was in the city and my lovely cousin gave me a heads up! The juices at Pressed are great, but what is really important are the Freezes: frozen “yogurt” made with only housemade almond milk

and sweetened with dates. My absolute favorite combination is chocolate and vanilla swirl with almond butter, cacao drizzle, and pink Himalayan sea salt. It is perfect. I could have eaten at least five of these, but alas I ran out of time. Pressed has locations all over California and NYC.

I wanted to try Sweetgreen and Brodo too, but I ran out of time – which gives me the perfect excuse to go back! Did I miss any other great places?! Let me know for my next trip!

2 thoughts on “Paleo Weekend in NYC”